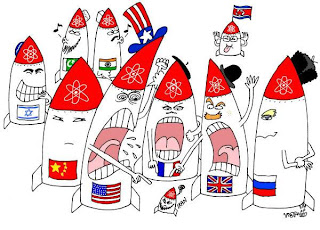 Terrorism and Mass Media: An insight on Jihadist strategy

There is a scholarly consensus around the construction of the concept of terrorism as:

“An anxiety-inspiring method of repeated violent action, employed by (semi)-clandestine individual, group or state actors, for idiosyncratic, criminal or political reasons, whereby – in contrast to assassination – the direct targets of violence are not the main targets. The immediate human victims of violence are generally chosen randomly (targets of opportunity) or selectively (representative or symbolic targets) from a target population, and serve as message generators. Threat - and violence – based communication processes between terrorist organization and victims are used to manipulate the main target (audiences), turning into a target of terror, a target of attention, depending on whether intimidation, coercion, or propaganda is primarily sought” (Alex Schmid, A.Jongman, 1984).

The terrorism emphasizes what we call "ontological process" factors including psychological, social and cultural, which provide the setting up the analysis of the phenomenology of terrorism.
Still on the categorization of terrorism is essential to stress is essential to stress the existence of strategic objectives and tactical objectives. Those objectives influence and determine one or more subsystems of the international component of the decision-making, in order: to generate functional imbalances, which can affect the priorities on the agendas of international institutions, multilateral relations and even political-military alliances. Thus, We are in the presence of a context of globalization of terrorism, without territorial and geographical configuration.

In the analysis which is on the "geopolitics of terrorism," Remi Baudoui (2009) puts the phenomenon of transnational terrorism as part of a new interpretation of space and territory as a platform of the organization of terror. This is evident in the passage of semantic designation of "terrorist group" Al Qaeda applied to "terrorist network". This change reflects the evolution itself and adjustment of operating ALQaeda. Indeed, it appears that initially, Al Qaeda is organized around the defense of Muslim lands in concrete against the expansionist enemy in Afghanistan. In a second phase, the aim is to remove the infidels of the spaces that form the basis of Islam's spiritual collective memory, or liberate Jerusalem. A third phase corresponds to the constitution of global Jihad, without borders and citizenship. This "territorial"/"deterritorialization" of the phenomenon of Islamic terrorism matrix is a major challenge, because it seeks to become a legitimate identity that evolves a “local” territory toward a global space, that means – the “glocalization” of terrorism.

Any study of global terrorism as a geopolitical issue necessary need the approach on the use of mass media as a part of terrorism propaganda strategy and as a part of its “political” agenda as well.

Marshal McLuham, one of the most celebrated researchers on the social impact of the mass media, came to the relatively precocious conclusion that “without communication terrorism would not exist”. This short sentence holds a truth that has remained unchanged during the last two decades. It is not uncommon to cite the relationship between the diffusion of terrorist messages and the existence of modern mass media (Manuel Soriano, 2008:2).

“Terrorism is theatre” and terrorist attacks carefully choreographed to attract the attention of the media. In turn, the media responds to these overtures proving unable to ignore what has been accurately described as “ an event”, according to Bruce Hoffman, quoted by the report on” Mass Media and Terrorism” conducted in 2008 by the Institute for Safety, Security and Crisis Management, under the auspices of European Union .

In this study, the researchers considering that the media are very well suited for the purposes of terrorists. Several theories concerning characteristics – or capabilities - of the media explain part of this phenomenon. Two of the most important media theories are “agenda setting and framing”.

“Agenda setting” is the theory that the more attention a media outlet pays to a certain phenomenon, the more importance the public attributes to such an issue. The theory of “framing” states that the way a news item is presented can have an influence on how it is interpreted or understood by the audience  ISSCM,2008:6 apud Scheufele and Tewksbury, 2007:11-12).

For Paul Wilkinson (1997), in using TV, radio and the print media the terrorists generally have four main objectives:

1) To convey the propaganda of the deed and to create extreme fear among their target group;

2) To mobilize wider support for their cause among the general population, and international opinion by emphasising such themes as righteousness of their cause and the inevitability of their victory;

3) To frustrate and disrupt the response of the government and security forces, for example by suggesting that all their practical anti-terrorist measures are inherently tyrannical and counterproductive; and

4) To mobilize, incite and boost their constituency of actual and potential supporters and in so doing to increase recruitment, raise more funds and inspire further attacks.

Other author, Brigitte Nacos, stated that terrorists have four general media - dependent objectives when they strike or threaten to commit violence.

The first is to gain attention and awareness of the audience, and thus to condition the target population ( and government) for intimidation: create fear.

The second goal is recognition of the organizational motives. They want people to think about why they are carrying out attacks.

The third objective is to gain the respect and sympathy of those in whose name they claim to attack.

The last objective is to gain a quasi-legitimate status and a media treatment similar to that of legitimate political actors (Nacos, 2007:20).

By regularly appearing in the media, terrorists are trying to become a legitimate representative of their own cause. Whether or not the audience agrees is, for this objective, of less importance. The theory is that merely the fact that they are treated by the media much like regular, accepted, legitimate world leaders gives them a similar status. This is mainly achieved by getting personal airtime through interviews and recorded videos or messages. Framing is very important in this. If terrorists having the media frame their leader much like a “regular” leader would be framed, the audience may got the impression that the two are comparable. If, on the other hand media make a clear distinction between actual world leaders and terrorist leaders, the audience may do so too. ALQaeda use this strategy, by regular sending in videos to the media portraying their leaders as leaders of the world (ISSCM,2008).

Michael Wieviorka, a French sociologist quoted by Manuel Soriano(2008:6) splits the relationship between terrorists and the media into four different levels:

1) Complete Indifference - The terrorists’ goal is to terrorize their victims, without seeking to attain media attention for their acts. There is no expectation that the press will become involved. This French author does not hesitate to mention that this situation is highly unusual;

2) Relative Indifference – The terrorists are not concerned with being on the news, even though they are conscious of the power that explaining their cause in currently existing media can provide them;

3) A Media-Oriented strategy – The terrorists are not only aware that the press can expand the scope of their words and actions, they also perform a series of operations based on the knowledge that they possess on the dynamics and functioning of the news producers. After well thought manipulations, the news media becomes integrated in the terrorist group’s actions;

4) Complete Breakaway – This is case of terrorists that see journalists and reporters as enemies that must be destroyed, putting them on the same level as other direct adversaries. The press ceases to be an entity that should be cynically manipulated. It is instead viewed as the appendix of a system that must be destroyed.

In our opinion, in the Relationship – Media oriented strategy the Alqaeda tends to use- for example- special relationship within the Aljazeera to bolster their political agenda, a logic that is very close to the latent political communication processes used in the West by pressure groups and interest groups that have particular access to mass media. This leads to Al Qaeda that should be observed and understood not as a messianic movement uniting the "Umma", but rather as a project to capture and exercise of power, which has as one of its main elements, the "media management processes".

Thus, in this “media management processes”, Al Qaeda has developed a new strategy concerning a bet on the new information technology use – the cyberspace and internet.

Like is stressed by Soriano, Al Qaeda has learned from the propagandistic experience of other terrorist groups that surround it. Many of them almost never establish direct contact with the mass media, concentrating their communicative activities in cyberspace. These methods have prevented them from receiving wide media attention. Paradoxically, the mass media themselves use the web to look for footage and messages that act to further illustrate their news stories. The very existence of these elements on the Internet isd a story in and of itself, without the need for other intermediaries. In this way, the news is compelled to reflect and present those events that anonymously have the capability to gain noteworthy repercussions on international public opinion.

For Al Qaeda, the Internet is not only method to reach the media in a safer and more immediate way, it also is a turning point in their communication strategy given that the web devalues the importance of traditional media. For the first time in history, cyberspace allows for there to be direct communication between a terrorist and his “public”. Terrorists control their messages well, always saying exactly what they want to say and when they want to say it (Soriano, 2008:15).

Another example of the use of Internet by terrorist groups is concerning the website Kavkaz Center, which is used as message passing interface by the self-proclaimed Caucasus Emirate. This islamist structure is responsible for several attacks in North Caucasus and Moscow, that is an example the suicide bombings attacks of March 31, 2010 and January 24, 2011.In both situations was through the website Kavkaz Center that the group claimed the attacks.

Kavkaz Center it is a quite interesting case study since its media strategy has three main goals: Transmit the Jihadist message and mobilize support from “Umma ” around the world; transmit the idea of the suicide terrorism as an act of heroism; and conduct propaganda actions to demoralize the Russian strategy toward the combat of terrorism in North Caucasus.

In sum, I would like to stress three main points:

1) The mass media and particularly the network media have become operational tools for terrorists ensured them a wide capacity of penetration in different communication arenas;

2) They adapt and adopt their messages and communicational methods accordingly the audiences and collective psychological behavior;

3) The mass media strategy developed by the global terrorist threat is part of a geopolitical agenda in order to create a “war” between Islam and the Western Civilization values.

Soriano, Manuel (2008) – Terrorism and the Mass Media after AL Qaeda: A Change of Course?, Athena Intelligence Journal,Vol.3, No2. www.athenaintelligence.org “Frost/Nixon”, entre a conquista e a efemeridade do poder